One step forward two steps back

Its been quite some time since the last update. Over that period my wife and I have spent some time gardening and working on landscape projects getting the property in better shape since the drought and fires. We have had an incredibly wet spring including local flooding however everything is green and growing.

We took some time out going to Lightning Ridge and visiting a number of painted silos including Barbara, Merriwa and Dunedoo. It was an also an opportunity to see what is left of former NSWGR infrastructure and I was pleasantly surprised to what still remains at many locations. The silo art trails in NSW and Victoria are worth seeing, to date Weethallee has to be one of the best IMHO.

I have been unhappy with many aspects of the layout backdrop and decided to rip it off and start again. There were several areas of concern, inconsistent textures, raised joining strips, hairs and blemishes on the surface, way too vibrant, inconsistent sky tones.

The new backdrop is slightly lower than the previous and will be a continuous from the Camden terminus around to the end of Narellan yard. I have built frames around the walls to mount the sheets of ply which are butt joined and filled. It can still be dismantled however there will be minor damage along the some of the joins which would need repatching and painting if the layout were to be moved. This has worked out well, I can now pull a module away from the backdrop to work on it (after disconnecting from up and downstream modules). This was very difficult previously as each backdrop bolted to the appropriate module and there was an assembly sequence.

I am painting the backdrop in lengths up to about 3 metres at a time and have mixed several jars of colour to paint a reasonably subtle mountain range in the background. I won't be putting too much detail in for now ( need to improve my painting skills considerably) however there will be a lot of undergrowth and trees along the Nepean River, Nepean house behind the Camden buffers and some close by undulating hills from Elderslie to Narellan. 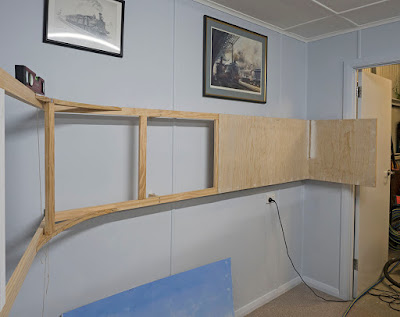 Construction has gone quite well and reasonably quickly but as they say the devil is in the detail. I will still make 2 dimensional models from paper and card to represent houses and buildings in the vicinity of the line. Again colours will be more subdued and as the colour palette is quite limited in my CAD package will do the buildings slightly differently to last time.

Many years ago there was an excellent exhibition layout in the Newcastle area called SMR that had many unique and innovative features in its day, one was 2D trees essentially a painted trunk and branches on clear acetate with woodland foam glued around the tree structure. It was very effective and I will try a variation of this.

I am using the opportunity of the modules being away from the backdrop to slowly finish off the little things from Camden through to the start of Narellan. This has put the project back in terms of time but I think there will be a much better end result. The fixed backdrop also allows the opportunity to add an enclosed pelmet and better lighting. For now I won't be adding pelmets - its more time and expense and I am keen to get back on track and finish things and one day operate a railway.

Posted by camdenmodeller at 02:55 3 comments:

A change in pace.

I trust fellow modellers are surviving the current pandemic and maybe using some of the restrictions to catch up on some hobby things. Since the last post I have been working on the milk factory, installing concrete aprons around the building, started the awning and boiler house as well as working on the cooling towers. The awning is a very flimsy structure built with evergreen channel and right angle section. I am being challenged to build it square and straight. Once the corrugated iron is in place it will probably be OK.

As mentioned in the previous post there is a great Facebook page dedicated to the Camden branch and there has been the odd glimpse of the boiler house at the milk factory in various posted photos, to allow construction. Some progress shots below. 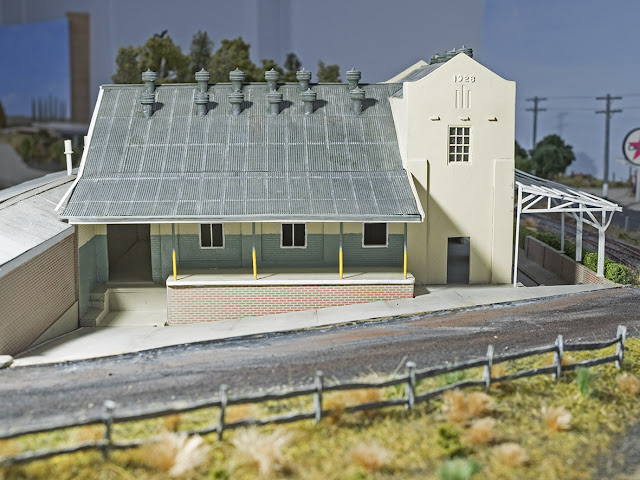 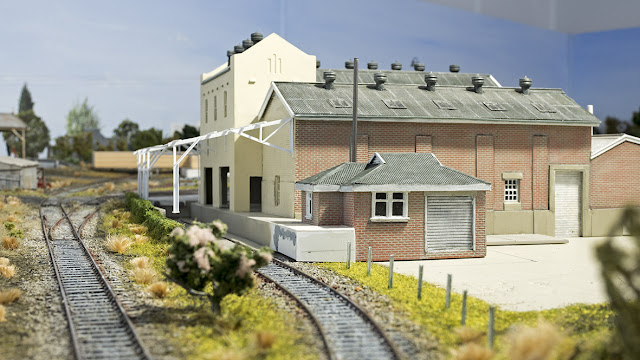 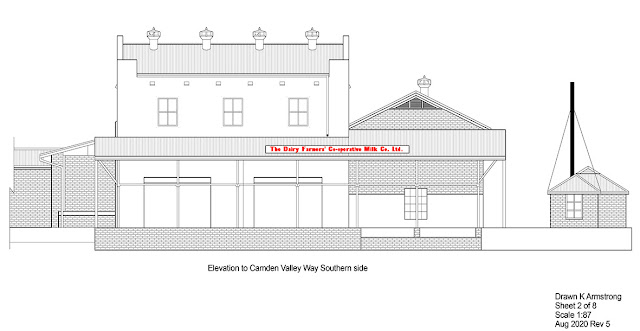 Have also been experimenting with weathering wagons using a combination of airbrushing, water soluble pencils and dry brushing. Weathering is a very subjective thing and still have a way to go. I use acrylic paint mainly Tamiya and Gunze. For the grime a very light dusting is applied of a mixture of Tamiya flat black XF-1, Buff XF-57 and flat clear XF-86. Dry brushing is done with various shade of grey and white. Some examples below including an weathered and unweathered HG. 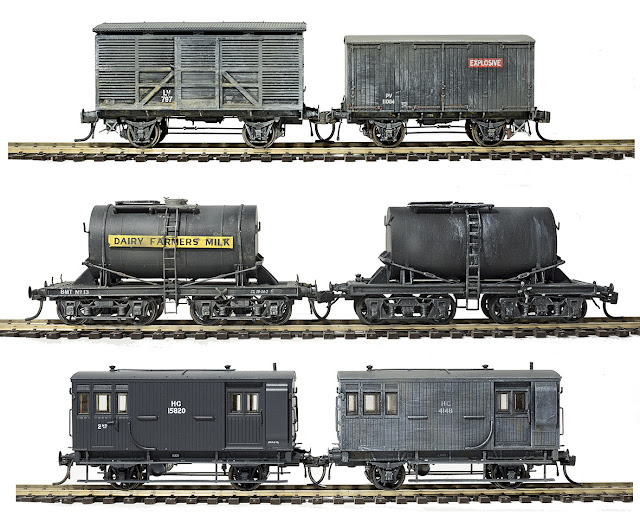 I have also been sorting out intermodule wiring. A  standard colour scheme is used and 4 pin DIN plugs and sockets for connectivity.  I can plug any module into module 1 and things should work which makes it easy for testing when modules are pulled apart which is a common thing at present while doing scenery and detailing.

All wiring is documented in a spreadsheet and diagrams done in CAD - can't rely too much on memory anymore. It does help with trouble shooting and if the layout gets sold one day the new owner will have an idea how it all goes together 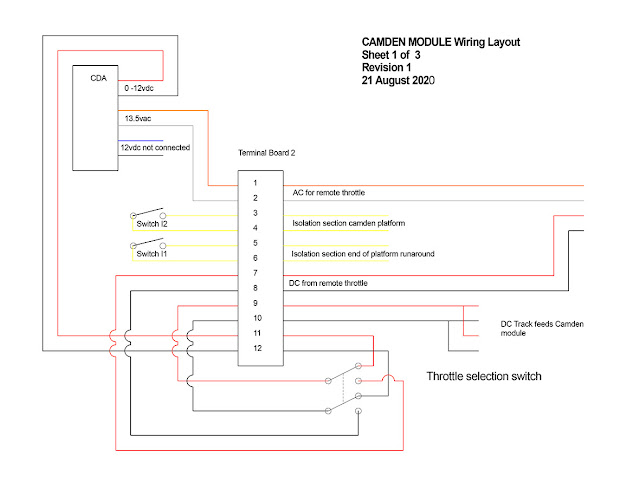 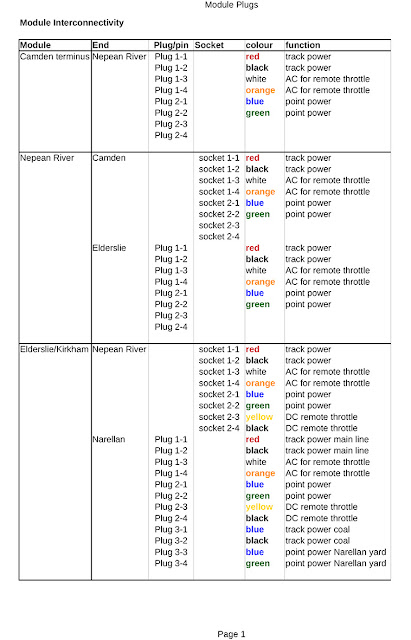 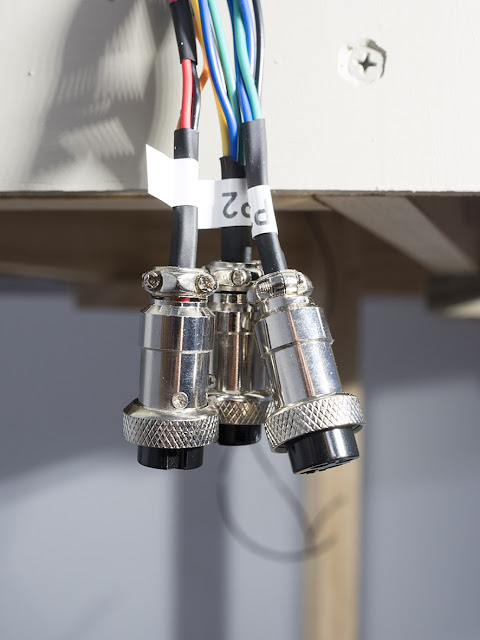 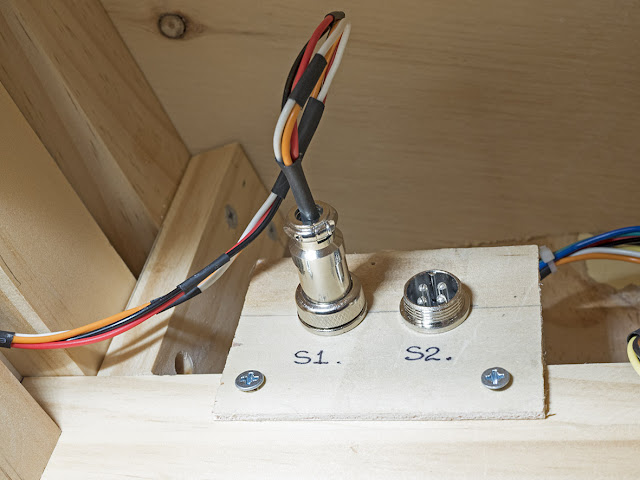 Work is also progressing on rebuilding the Bachmann shunter into an early 79 class - those very long buffers on the 79 may cause a problem with buffer lock even though I have very long couplers installed. Should have some 79 pics next update.